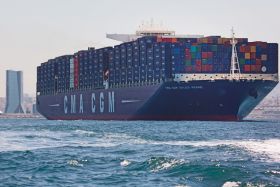 The CMA CGM Group has signed an agreement to acquire a 90 per cent stake in the Fenix Marine Services (FMS) terminal in Los Angeles. The terminal is currently held by EQT Infrastructure III, based on an enterprise value of US$2.3bn.

Currently holding a 10 per cent stake in the terminal, CMA CGM will become sole owner of the FMS facility post-transaction closing.

The closing of the transaction remains subject to the approval of the competent regulatory authorities.

FMS is the third-largest terminal in the Los Angeles/Long Beach port area in terms of capacity (around 2.5m TEU) and one of the largest in North America. The terminal also benefits from a long-term concession agreement (through 2043).

The FMS terminal has a strategic deep-water location and has infrastructure including four berths, each more than 1,000 feet long and with a draft of 50 feet; 16 cranes, eight of which are capable of serving very large ships; and more than 700 reefer plugs with 24/7 reefer monitoring.

After closing, the CMA CGM Group will take over the operations of the industrial facility with a goal of improving its service quality to better deliver upon its customers’ expectations.

By early 2022, the FMS terminal will welcome the first CMA CGM liquefied natural gas-powered 15,000-TEU ships to be deployed on routes between Asia and the US.

“The swift recovery of the global economy has demonstrated the importance of ports and logistics infrastructure," said Rodolphe Saadé, chairman and CEO of the CMA CGM Group. "In order to manage efficiently our port operations on the West Coast of the United States, we have decided to acquire Fenix Marine Services.

"Fenix Marine Services is one of the largest terminals in this country and one of its most strategic gateways," he added. "It is a key industrial facility which will significantly strengthen our position and support our rapid growth in this market.”