Dole and Chiquita in Angolan talks 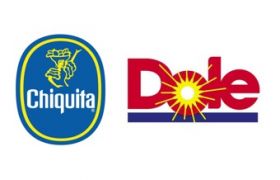 US fresh produce multinationals Dole and Chiquita Brands International have held talks with local authorities in Angola to explore the possibility of establishing new partnerships designed to increase the southern African country's agricultural output, according to press reports.

In a a visit to the Angolan capital Luanda on Sunday, US Secretary of State Hillary Clinton was expected to push for greater opportunities for US investment in Angola as it looks to secure close links with the country.

Chiquita recently established strategic, long-term banana sourcing agreements with partners in both Angola and Mozambique which it says will enable it to supply "approximately 20 to 30 per cent" of its European volume from 2011 onwards.

Crucially, sourcing bananas from Africa in this way will help the US companies supply the EU market without any tariff costs and without investing capital in owned assets.

Angola is one of Africa's leading petroleum exporters and a major supplier of crude and natural gas to the US, but officials revealed that this week's US visit is in part aimed at increasing agricultural production in the country, which was ravaged by a 27-year civil war that ended seven years ago.

The US has said agriculture could provide a way to lift millions out of poverty in Angola, and across the continent.

"In Angola, Secretary Clinton emphasises Africa as a place of opportunity, built on an ethic of responsibility," a spokesperson for the US State Department told reporters in advance of Mrs Clinton's visit.

"She will underline America’s commitment to partner with governments, the private sector, non-governmental organisations, and private citizens to build societies where each individual can realise their potential."