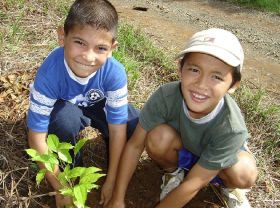 To coincide with Earth Day 2015, Del Monte Fresh Produce has announced that its banana operations in Costa Rica have achieved carbon neutrality certification from SCS.

Del Monte has also confirmed its continued commitment to conservation through its reforestation/conservation programmes across all its farming operations worldwide.

Carbon neutrality certification covers the entire custody chain from Del Monte banana farms – consisting of 33 farms and 41 packing houses, totaling 10,653ha – up to the loading port in Costa Rica. Greenhouse gas emission audits were conducted by SCS Global Services and were based on the following four, widely accepted, standards:

“We are very excited that our banana operations in Costa Rica achieved carbon neutrality status and were certified under these very stringent standards," said Hans Sauter, vice-president corporate research & development and agricultural services of Del Monte. "With these satisfying results, we are now looking into replicating this experience in other operations.

"This certification validates the effectiveness of our environmental sustainability efforts and it comes on the heels of our recent sustainably grown certification by SCS of our banana and pineapple operations both in Costa Rica and Guatemala," he added.

As part of the company’s commitment to offset its carbon emissions, Del Monte Fresh Produce continues to invest significant resources in maintaining nature reserves as well as planting trees in its operations worldwide.

It is estimated that by the end of 2015, a total of 7,578ha will be under protected status or reforested. This is in addition to the thousands of trees, many of them local species, which are donated every year to the schools and employees in communities where Del Monte operates.