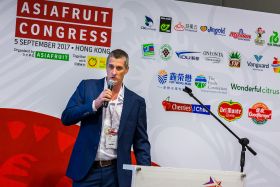 Vietnam is filled with opportunities to grow produce brands, delegates at the Asiafruit Congress were told in Hong Kong last week.

Zespri has been operating in Vietnam for six to seven years, but in that time Common said there had been major changes in market dynamics. Zespri has seen 30-40 per cent growth annually, he said, driven by the growth of the middle and affluent class, and the growth of second and tier cities.

The young, well-educated, and highly aspirational population are consuming 150kg of fruit and vegetables each year, enticed by brands and healthy products.

“Price is no longer the leading driver for decision-making,” Common said. Taste and consistency are now of high value, with imported fruit exceeding US$1bn.

“If you want to offload cheap, lower quality produce, it won’t work in Vietnam,” Common said. “Locally produced fruit are also of a pretty high standard.”

“But you do need to convince [consumers] to spend the money on premium or newer produce.

“The challenges are in consumer education around new produce, like the larger beef tomatoes,” van Wijk said, adding that when Fresh Studio began supplying MacDonald’s in Vietnam with locally grown tomatoes for burgers, media were falsely reporting that the produce had been imported from China.

Another example was the onion market, with MacDonald’s requiring a year-round supply for its fast food chains. While locally grown onions could be supplied to MacDonald’s stores from January to May, supplies were needed from New Zealand and the Netherlands to meet demand. This opened opportunities for New Zealand suppliers to market their produce to retailers and customers outside MacDonald’s, but van Wijk told delegates of one New Zealand supplier that went straight to a retailer that wasn’t aware of how to store, and market, New Zealand onions leading to heavy discounting to move the produce.

“Our marketing strategy is around consumer education – at a store level in front of consumers, with samples giving shoppers the opportunity to try fruit,” Common said.

At a trade level, Zespri is also working with traders and retailers to ensure quality, softer and sweeter fruit is delivered to consumers to deliver a positive eating experience and bring repeat purchases.

Common said Zespri was also leveraging on the brand attributes of Zespri, and its origin to build trust in the brand, using a local celebrity as a brand ambassador.

“We’ve seen success with minimal input, so if we increase investment in Vietnam, we can grow even faster. We see Vietnam as a really big market in coming years, and it has all the characteristics seen in China, just a few years behind. The momentum is there, and we can certainly capture that in years to come.”

“In Vietnam, there are good opportunities to build your brand. Supermarkets are hesitant to use their own brands,” van Wijk added.