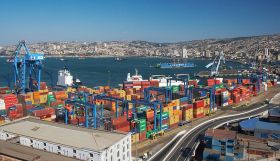 A month-long strike that has paralysed the Chilean port of Valparaíso is threatening to derail the start of the cherry and blueberry export campaign.

Ronald Bown, chairman of exporter association Asoex warned that the impact of the strike would worsen as the weeks of peak supply draw nearer.

He said the uncertainty among importers about whether or not they will receive their fruit on time risked them changing to alternative supply countries.

Fruit shipments through Valparaíso are down 95 per cent in the past month as a result of the stoppage.

Instead, companies are rerouting exports on the port of San Antonio, which has seen an almost tenfold increase in fruit traffic in the month to 16 December, with volumes reaching 70,368 tonnes compared with 7,380 tonnes in the year-earlier period.

Figures from producer organisation Fedefruta show that only 3,006 tonnes of fruit cargo moved through the port between 16 November and 16 December, compared with 59,883 tonnes in the same period of 2017.

The port workers say they will not return to work until their wage demands are met. Some 500 stevedores at the port’s TPS terminal are demanding a one-off payment of around US$3,600 and better working conditions.

The strike is already estimated to have caused losses of more than US$400m to the national economy.