Avo-lution on track across Asia

Final instalment of Asia Briefing looks at avocados, a category expected to grow substantially in Asia over next decade 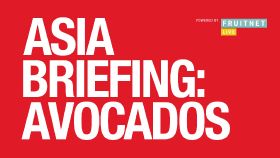 If we were to look at historical data, all signs would point to Europe and North America as the leading export markets for the world’s leading avocado producers, including Mexico, Peru and Chile.

But as we have observed across other key categories, such as Cherries, Asia – and in particular China – is fast becoming a key export market for the wildly popular fruit.

Discussion during the final Asia Briefing, Fruitnet's series of weekly market briefings held in the lead up to Asia Fruit Logisitica ON, began by looking at the marketing and promotional campaigns in established markets.

Eurofruit editor Mike Knowles highlighted that avocados enjoy such a prominent market position in the US, the fruit played a starring role during the half time break of the 2020 Superbowl – a sporting event viewed by 100m people.

With global annual consumption having tripled over the last 20 years, and importers in Europe breaking records for volumes, the category has a strong future in established markets.

However, it’s Asia that’s currently considered the next frontier for the fruit. Wayne Prowse of Fresh Intelligence Consulting said trends show trade into Asia has tripled in volume over the last decade. “Japan is the biggest importer of avocado, importing 74,000 tonnes into June 2020 – down 5 per cent, year on year," he noted “China meanwhile imported 28,000 tonnes, which was down 38 per cent year on year, largely due to complications in logistics,” he noted.

Trade into Asia is dominated by Mexico, which sent 84,000 tonnes of avocado into Asia last year, mostly into Japan. The US has seen substantial growth, sending 9,600 tonnes in total, a 45 per cent increase on the previous year totals.

Mexico, Peru and Chile are all jostling for market share in Asia and are looking to increase avocado exports to the region. China represents the most exciting prospect for growth, with Colombia, Kenya, South Africa and the US state of California looking to join the supply push.

Paulina Theologu, group commercial executive for leading supplier Westfalia Fruit, said a lot of countries are increasing production at a very fast rate, and a lot of the production is limited in where it can be exported.

“Peru can send its fruit anywhere, but South Africa can only go into Europe, so the reality is we need to make sure we understand market growth, as well as the production growth, and we have to make sure there isn’t a glut in the market at certain points in time.

She continued: “I think we will experience crashes, as we did this year, but overall the annual growth of the category in terms of volume shows we have some room to marry the demand and supply. For me that’s north of ten years before we see the category commodified, and longer if Asia takes off in a big way – which currently there isn’t enough supply for that to occur.”

Peruvian producer Camposol, which has pioneered of the country’s avocado production since 1999, is leading the push into Asia. Managing director Jose Antonio Gomez said the company’s plans hinge on developing reliable year-round supply.

“We are investing in Colombia, we currently have 2,000ha of planting there that will begin to produce fruit over the coming years, and we expect that within 5-6 years we’ll have stable and year-round supply,” he said. “Currently we are only able to grow the business little by little, the lack of year-round supply is hurting the ability to develop the category in China, and Colombia will help us with that.”

The Peruvian producer has also looked into producing the fruit domestically in China, but Gomez noted the Covid-19 pandemic has put those plans on hold. “We have explored that avenue, our team has looked and identified certain partners and areas for production in China, but Covid has slowed progress. It is not stopped altogether, but we are currently reassessing timing and the need for that,” he explained.

For Colombian producer Cartama, the next two decades are crucial for the country’s position as a supplier of avocados. Commercial director Luis Carlos Maya is confident the country is on track to reach that point sooner.

“Every year we are seeing 3,000ha to 4,000ha being planted here. Currently, according to official stats there is 20,000ha to 25,000ha of avocado plantation in Colombia, and I believe we’re well on track to be the second biggest producer of the fruit, behind Mexico, in under 20 years,” said Maya.

The Colombian government is well aware of the boom in production, which Maya believes is an important step for opening access to new markets.

“While Japan is the most developed country in Asia right now, and China has the biggest potential due to the population, the Colombian government is trying to secure access to new markets, such as South Korea, which should be open next year,” he added. “The Colombian government understands the importance of diversifying markets, as 90 per cent of the crop was going to Europe."

Closer to Asia, and Australia and New Zealand are firming as key suppliers of premium avocado, due to the higher costs in production.

Jacob Darling, general manager of sales and marketing for New Zealand-based global producer Darling Group, said access to China is a recent milestone for New Zealand, and so progress will take time.

“Market access into China for New Zealand avocados is relatively new and had been two to three years in the making,” highlighted Darling. “First, we needed to identify the appropriate channels in China, willing to accept a premium product, as well as customers and consumers willing to pay a premium price."

Then there are challenges to delivering a premium product, consistently. "The last couple of years have proven challenging, especially in understanding what the market requires," he noted. “As Darling Group, we’ve put a lot of energy into building momentum, which the New Zealand avocado industry has also contributed significantly to. We intend to continue increasing the volume we send each year."

Darling Group is aiming to grow its premium offering, Jake’s Avocados, in China by focusing on provenance. “We’re a New Zealand grower in the first instance. There are specific health qualities in our produce, such as Folate and B6, that allow us to command a premium price. But we also focus on providing a 12-month supply, which gives security and supply to our customers. It is a point of difference to our competitors from New Zealand who only have supply for that 3-4-month window."

As for China’s domestic production, Liu Mosu, general manager for leading brand Mr Avocado, had some interesting insights to share regarding consumer sentiment. “More and more consumers prefer to buy ready to eat avocados over unripe ones,” she explained.

“The downturn in the foodservice sector is a challenge for every category, as these clients are an important channel for fruit. We’ve shifted our strategy to sharing recipes for how to use the ready to eat fruit, and how to combine it with Chinese food culture to eat it in our own way."

To watch a replay of this week's Asia Briefing Avocados and all previous episodes, visit the Asia Fruit Logistica website and head to About > Events > Pre-Event Webinars, where you can register for access.