Record month for empty container volume at US transport hub 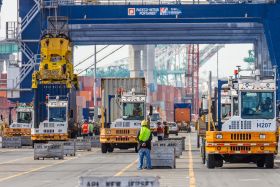 Empty containers climbed to 367,413 TEUs over August, a jump of 17 per cent compared to last year due to the continued demand in Asia. It was the highest number of empty containers the port has handled in a single month, eclipsing the 361,359 TEUs processed in May 2021.

Eight months into the 2021 calendar year, the port’s overall cargo volume is 7.27m TEUs, an increase of 30 per cent compared to the same point last year.