QV and Taypack in breeding deal 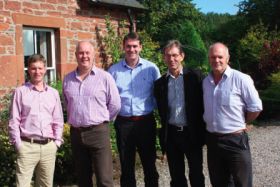 Taylor Food Group, which owns Taypack, QV Foods and its subsidiary Pseedco are all based at Moncur, Perthshire. According to QV, the deal with MRS is worth a undisclosed six-figure sum.

Breeder Finlay Dale, who leads the Hutton’s potato team, will use the latest technological advances, including the recent mapping of the potato genome to develop new varieties from salad potatoes to baking potatoes.

The previous breeding programme has left a legacy of hundreds of crosses which will be available for further use, but attention has recently focused on an unnamed selection which is very near to commercialisation and is grown on a field scale.

The variety has been multiplied by the Brown family at West Adamston, near Dundee and is showing good resistance to tuber blight and to blackleg resistance.

It also shows partial resistance to pallida, a type of potato cyst nematode and good immunity to virus Y and powdery scab.

The involvement of seed potato company Pseedco and its fresh and prepared potato parent company QV Foods will bring a ready market for the new MRS varieties.