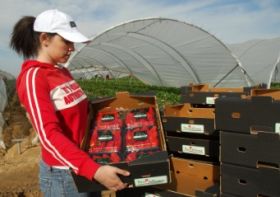 Initial results from a study of strawberry growers in the Spanish region of Huelva who supply German retailers through fresh produce marketing organisation Landgard have reportedly shown that the overall volume of naturally occurring water required by those producers is at a sustainable level.

The research, which was commissioned by the Kehl branch of Straelen-based Landgard and carried out by the Hydraulics Institute at the the Univeristy of Cordoba, follows Landgard's recent commitment to the sustainable sourcing programme Best Alliance operated by one of its biggest customers, German food retailer Rewe Group.

"It turns out that, in general, the agronomic sector's use of naturally occurring water, at an average of 7,500 cubic metres per hectare, is above the level of water usage recommended by NGOs," said a spokesperson for Landgard.

"It should be noted, however, that even today the water usage of the vast majority of producers who work for Landgard is at, or just below, the required level, according to the institute’s findings."

Landgard, which in November 2008 acquired a majority share in Vetter Holding, parent company of leading import service provider Peter Vetter Group and a major player in terms of sourcing from Spain, has plenty of experience of managing strawberry procurement programmes in the country.

Four years ago, the company signed up to Rewe's Best Alliance and since then, it says, it has ramped up efforts to ensure its commercial activities do not have a negative impact on the environment.

In addition, Landgard recently began implementing a module of the international certification system GlobalGAP, known as GRASP, which is designed to carry out a risk assessment on social issues.

The relatively new module has been apparently very well received by producers and will be audited for the first time in 2012, with plans already in place to extend it to other areas and suppliers.