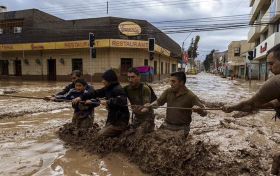 The Chilean government has declared a state of emergency after freak rains in Chile’s Atacama region caused flash flooding, killing at least seven people and leaving several others missing. Local reports say power supplies have been knocked out and roads cut off after the Copiapó river burst its banks.

Asoex said preliminary reports suggested that Tuesday (24 March)’s torrential rainfall – the worst the region has experienced in 80 years – had destroyed workers’ dwellings and caused widespread damage to grape production and local infrastructure including coldstores and packhouses.

The association pointed out that while harvesting in the III and IV regions was virtually finished, it estimated that 35-40 per cent of the Red Globe and Crimson Seedless crop that are yet to be harvested have been affected by the rain, equivalent to 4m cartons and 2.5m cartons respectively, and that vines would have to be sprayed in order to prevent the fruit from rotting.

“At the beginning of this week there were approximately 1.5m cartons of Red Globe and 400,000 cartons of Crimson Seedless in coldstorage and this fruit will be shipped as normal,” the association said.

Asoex said it was coordinating with producer and exporter associations in Atacama and Coquimbo to provide assistance for those affected by the flood.

President Michelle Bachelet, who flew to the area, said: “We’re living in an extremely difficult situation. The previous forecast was that there was a huge drought here, so the rains were not necessarily seen as a catastrophe. Foreseeing was really difficult because no one knew.”