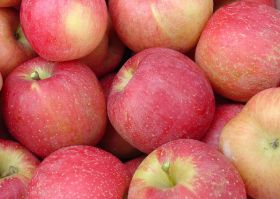 EverCrisp is a cross between Fuji and HoneyCrisp (Photo: MAIA)

Leading apple companies in Europe, the US and the Southern Hemisphere have signed a landmark agreement that paves the way for them to produce and eventually market the branded apple EverCrisp.

The variety, a cross between Fuji and Honeycrisp known as MAIA1, was developed by the Midwest Apple Improvement Association (MAIA) after more than a decade of cross-breeding, and has already undergone extensive testing by growers in the US.

At its annual general meeting in Berlin on 1 February, the International Pome Fruit Alliance (IPA) confirmed it had agreed terms with MAIA to begin trialling the apple, a deal that represents the first exclusive worldwide variety and brand development venture for both parties.

The agreement marks the first step towards establishing a joint venture company that will exclusively develop and market the EverCrisp brand worldwide outside the US.

According to MAIA, EverCrisp’s most prominent advantages are its appealing, sweet flavour profile and storability. Its apparent suitability for markets across the globe are understood to have prompted this week’s agreement.

IPA represents leading apple and pear growers, packers and marketers from the main production regions of Europe, Australia, Chile, New Zealand, South Africa and the US. It specialises in the procurement, testing and commercialisation of new apple and pear varieties.

MAIA, meanwhile, was established by apple producers in the US Midwest who wanted to develop economically and culturally viable apple cultivars.

IPA general manager Peter Dall, welcomed the groundbreaking deal: “We are very excited to partner with MAIA in this endeavour for the opportunities that MAIA1 EverCrisp represents for the members of both organisations.”

MAIA’s president and chief executive Bill Dodd added: “We are pleased and excited to partner with the International Pome Fruit Association, another grower-driven organisation, to introduce and expand the EverCrisp brand internationally.”