Leading figure in the development of US asparagus trade survived by his wife, three children and six grandchildren 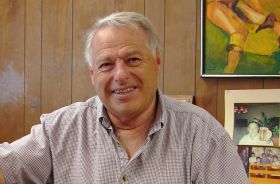 Leo Rolandelli, the man commonly known as the ‘Godfather of Asparagus’,  passed away on 31 October at the age of 77.

Born in Oakland, California, Rolandelli got his start in the produce industry with a small company in his home state in 1963, before joining Jacobs, Malcolm, & Burtt (JMB) later that year.

He purchased JMB in 1968 and immediately helped make the then 80-year-old company a fixture on the San Francisco Wholesale Produce Market, eventually taking on the role of president of the market’s merchant association as well. In this position, he worked with many other Bay Area merchants, including his own competitors, to improve the visibility, marketing, and development of their brand names and products.

“Leo was a mentor and confidant to many of us whom came up under him in the asparagus industry,” said Dan Miller, JMB’s production manager.

In the 1970’s, Rolandelli was a key figure in shifting JMB’s primary product interest from general produce to asparagus. From there, he worked tirelessly to evolve the US asparagus industry, convincing consumers to think of the spear-shaped vegetable as an everyday diet staple rather than a specialty product.

“Leo will long be remembered as one of the originators who helped so many families figure out how to market asparagus,” said Jens Hutchens of JMB International.

Rolandelli also had the foresight to understand that growing Mexico’s asparagus production base could help supplement US-grown product, creating a year-round supply chain that would benefit growers, retailers and end-consumers. Peruvian and Chilean asparagus was later added to JMB’s sourcing programmes, positioning the company as one of the largest sellers of asparagus in the world.

After selling JMB’s street operations in 2012, Rolandelli spent much  of the last decade developing and growing the brokerage arm of his company. By focusing solely on shipping and supplying - leaving the growing side of things to established growers - he invested in a business model that echoed his longtime commitment to what he reffered to as the “greater good”.

With this partnership format, JMB consciously works to put money back into its growers’ local economies, which helps producers fund more efficient ways to grow, harvest, and store products.

“Working next to Leo has been a great experience and one that I will never forget,” said Chris Brazeel, JMB sales manager. “He was ‘old school’ and those who knew him had tremendous respect for him in the produce industry and for just being a great person. Unfortunately, we do not see many people like him anymore.”