Congestion is intensifying at the US-Mexico border after President Trump's closure threat, according to media reports 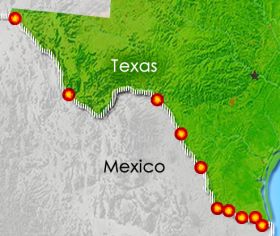 Freight costs and congestion are rising along the dividing line between Mexico and the US, and will continue to do so whether or not US President Trump decides to close the border, reports JOC.com.

In Ciudad Juarez, across the border from El Paso, truckers heading to the US border face up to 12-hour delays following a reshuffling of border agents, according to Reuters.

In Laredo, the largest US-Mexico border crossing point for freight, CBP on Wednesday closed lanes on three of the bridges bringing freight and people into the US, JOC.com said.

And, in Nogales, Arizona, which handled more than 337,000 US-bound truck crossings last year, CBP last week said it would suspend commercial truck crossings on Sundays. Nogales is a major point of entry for produce from Sonora, Mexico.

The sheer volume of freight moving by truck between Mexico and the US – trucks transported US$484bn in US-Mexico freight last year, according to data from the US Bureau of Transportation Statistics – leaves few transportation alternatives in the event of a border shutdown, JOC.com said.

Some freight could be switched to ocean vessels crossing the Gulf of Mexico or moving along the Pacific Coast, but the logistics challenges would be formidable and the costs would be high, perhaps high enough to keep businesses from shipping altogether, the report said.

US President Trump last Friday threatened via Twitter to close the border or “large sections of the border” if Mexico “doesn’t immediately stop ALL illegal immigration coming into the United States”. He appeared to backpedal on those remarks Tuesday, but on Wednesday, reiterated his threat, this time if Congress doesn’t “immediately get together and eliminate the loopholes at the border...If no action, Border, or large sections of Border, will close".

“Closing the US-Mexico border would inflict severe economic harm on American families, workers, farmers, and manufacturers across the United States,” Neil Bradley, executive vice president and chief policy officer at the US Chamber of Commerce, said on Monday. “Even threatening to close the border...creates a degree of economic uncertainty”.