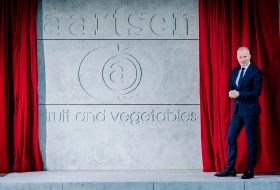 Dutch fresh produce company Aartsenfruit has a new name and a new home.

Rebranded as Aartsen, the group said it wanted a name that guaranteed growth as it moved into a completely modernised and expanded headquarters in Breda.

In particular, it noted, the change of name reflected the broad range of products it supplies – not just fruit, but vegetables too, as well as the importance of its family origins and their perception in an increasingly global market.

"This is what ‘nonstop fresh’ is all about… continuing to develop and modernise," commented chief executive Jack Aartsen. "We’re always on the move, and will never stop changing Aartsen’s future for the better.”

Aartsen's reputation as a reliable supplier to customers around the world has certainly been enhanced by a major marketing exercise around the idea of constant, consistent supply.

Back in 2016, it unveiled a new brand identity to position the group as a one-stop shop for all kinds of fresh produce sourced from anywhere in the world.

It now operates an Asian division via its office in Hong Kong, sourcing and distributing produce to customers in several markets in the surrounding region.

Aartsen's headquarters has also been reconfigured with a global customer base in mind, the group said.

What started out as a farm is now a carefully designed and constructed building for the modern age.

"The building is light, transparent and welcoming," a spokesperson for the group commented. "It makes a perfect international gateway, but without the hustle and bustle. Visitors are personally welcomed to the so-called flight board and they may check into the open entrance."

The company has certainly come a long way since 1907, when founder Jan Aartsen started delivering fresh fruit and vegetables by cart to customers in Breda.

By sharpening its focus on Aartsen's name, the aim will be to retain that familiar approach as further international expansion beckons.