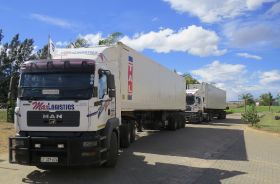 The introduction of a new law regulating the transportation of Hi Cube containers on South Africa roads is likely to be postponed for another year.

The postponement is down to the South African Department of Transport failing to give substance to instructions by its minister to do further research in order to reach a decision.

These containers have been transported safely on the present fleet of vehicles and trailers for around 30 years.

The legislation would have come into force on the 1 January 2019 and would have seriously disrupted the fruit export industry.

The Citrus Grower Association’s Dave Watts says he assumes that it is now highly likely that the moratorium will again be extended at least a further year. “This means that Hi Cubes will have been carried safely on SA roads for approaching 30 years,” he noted.

Logistics industry sources are shaking their heads in disbelief. “While the industry has suffered greatly because of a lack of infrastructure in transport systems and port facilities in South Africa, there is no time to waste on these matters where there is clearly not a problem,” they say.

Watts says the intention was to complete research into the subject by 30 June but, due to deficiencies in various terms of reference, nobody could be appointed to do the work in time. “In these circumstances there would appear to be no need whatsoever for further ‘research’," he explains.

The new regulations will restrict the height of trailers on which these containers can be carried. Presently, Hi Cube containers, when transported on a standard 1.6m deck height trailer, result in an overall height of +/- 4.5 m, 20cm over the legislated limit.

The industry has repeatedly pointed out that there is not nearly enough container trailers of the lower height required available in South Africa to legally transport Hi Cube containers on South Africa’s roads.

The matter has been dragging on since September 2011. The fruit sector will hope that its arguments that the present carriers have been able to move the containers without incident will prevail, along with the views of other cargo movers who will be affected by the regulations.