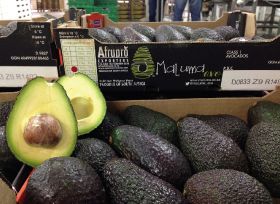 The South African avocado export crop for 2019 is set to conclude at 14.3m cartons, which is more than 30 per cent down compared with last year’s all-time record crop.

Having experienced an off-year, avocado growers are generally happy with market conditions and returns were boosted by a general international short supply.

“While avocado consumption is still increasing, our industry is still in a very good spot despite the decline in volumes this year,” said Derek Donkin, CEO of Subtrop. “We must remember that all went in our favour last year, and with new plantings coming into production we might say it was the perfect year to grow avocados. We are on a long-term path of growth and we know that we will have a bigger crop next year.

“This year was definitely not an indication of growth prospects," he explained. "Despite the 2019 drop, we are seeing continued plantings which will promote the industry forward in the years ahead.”

While the season is winding down, late production in the Southern and Eastern Cape and in the higher lying regions around Tzaneen is also on the increase.

However, Donkin said that only a small volume of that fruit was likely to be exported because the South African market is particularly strong during this time.

“It makes us less dependent on imports and this is a real boost for growers who can take advantage of these opportunities,” he said.

With the season winding down, the South African industry is already turning its attention to next year. It is likely to be another on year, but it is debatable whether it will achieve the same export levels as last year.

Donkin said that recent hot weather in the northern producer regions may affect the crop. There are also water shortages in certain areas which may somewhat curtail prospects.

“The next few weeks will be critical for next year’s crop, but we know we will have a bigger crop – just not how much bigger it is going to be."

It is clear that international cooperation in stimulating consumption is leading to increased sales. Donkin said that his impression was that more retailers than ever before participated in this year’s campaign.

“The market was stronger because all exporting countries reported reduced crops. So while we lost in volume, we gained in returns,” he concluded.