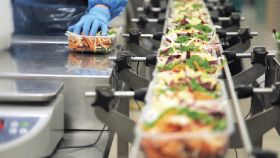 A packing line at La Linea Verde, based in Manerbio near Brescia

Fresh produce suppliers and supermarket chains have been making sizeable donations to local health services in Italy and China that are faced with the daunting prospect of tackling the widening coronavirus pandemic.

Brescia-based company La Linea Verde said it had donated €50,000 to its local hospital in Manerbio to help the local health system tackled the coronavirus emergency.

As an agrifood business supplying prepared salads and fresh ready meals to the supermarkets, the company said it had "a duty in this moment of national difficulty" to keep its production sites open while complying fully with regulations imposed for the protection of staff.

In a statement, owner-directors Giuseppe, Domenico and Andrea Battagliola said the group had always had a close, supportive and active role in the community where it was founded.

"This is a donation we are making on behalf of all employees, so that everyone in this moment of crisis can feel like they're playing an active part in the area where we were born as people and also as a business," they commented.

Elsewhere, retail giant Esselunga, which has its headquarters in Milan, has apparently earmarked €2.5m in donations to support hospitals, healthcare groups and scientific research.

Another supermarket chain, Gruppo Alì, which operates more than 110 stores in Emilia-Romagna and Veneto, is giving €1m to support its local hospital in Padua.

Together with its partner China Resources Enterprise, Mr Apple reportedly supplied the medical facilities with 1,176 cartons of the fruit as Chinese channels reopened to imported fruit.

“With China as one of Mr Apple’s largest export markets, we have seen the challenging conditions across all channels in China but have been moved by the commitment and hard work shown by all during this difficult time,” said Ben McLeod, global sales and marketing manager at the company.

There have been several similar examples of such generosity elsewhere. In China's Xinjiang region, the Korla Pear Association has cooperated with retail chain Pagoda to donate over 5,000 pears to more than 30 hospitals across Hubei, where the outbreak is believed to have orignated.

Pagoda has also helped to arrange donations of New Zealand kiwifruit, as well as thousands of surgical masks.

Another major player in China, Joy Wing Mau Group, teamed up with New Zealand companies Zespri, T&G and Rockit to donate 2,900 cartons of fresh fruit to the Third People's Hospital in Shenzhen.

In late February, several of Chile's major fruit exporters were working with national association Asoex to coordinate donations of produce to health centres across China.

And in Costa Rica, the Milenio reported that growers on the Hermosillo Coast have donated around 16 tonnes of oranges, lemons and grapefruit to help combat the spread of coronavirus and respiratory diseases in general.