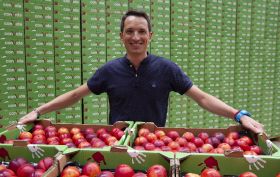 Catalan summer fruit producer Conjuntfruit has made its first foray into the organics market with the launch of its first ever organic stonefruit campaign.

Harvesting kicked off in the last week in May with the first apricots, which will be available until July.

“We expect flat peaches to be one of the stars of the category as the spring climate has led to a shortage of organic fruit,” said Francesc Giral, the company’s commercial director.

Rodrigo Masip Añó, the company’s technical director for organics, said 2020 would not be an easy season for organic stonefruit producers in Spain as the high temperatures in February had brought forward blossoming by around two weeks.

“The temperature did subsequently return to more normal levels, allowing for the phenological development of the fruit to get back on track,” he added.

Masip Añó pointed out that the campaign for organic fruit was full of uncertainties, “since the spring has been very humid and we’re seeing some skin damage due to the magnifying effect of water droplets in the sunlight, as we’re already seeing with apricots”.

Frosts at the end of March added to the challenges, but Conjuntfruit said most of its growers were able to protect their crops with anti-frost nets.

Giral said the fruit would be available from next week in retail chains and specialist stores in Germany and France.