The first Conference pears of the new topfruit season were sold at the BelOrta auction last week, with extensive promotions to back up the campaign 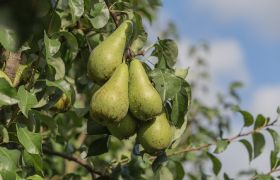 This year, BelOrta anticipates a lower apple harvest, with acreage expected to fall by 4 per cent. The cooperative forecasts a pear harvest comparable with last season, despite acreage falling by an estimated 10 per cent.

As usual, BelOrta is backing up the campaign with an extensive media plan, putting BelOrta topfruit in the spotlight on both Flemish and Walloon TV this autumn.

The group has announced the launch of a new partnership with popular baking programme Junior Bake Off, which will challenge junior chefs-in-the-making to create fun dishes using BelOrta apples.

Other initiatives include a radio spot on Flemish and Walloon radio, various online efforts, PR campaigns and product samples in the country's Plopsa theme parks.

As for pears, in addition to the Conference, the cooperative offers Doyenné du Comice and Durondeau, as well as club varieties Migo and Fred.