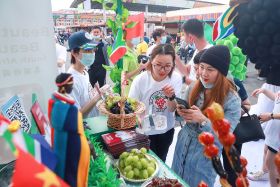 South Africa is poised to conclude its 2021 table grape season with record sales in China after carrying out its first promotion there since gaining access to the market in 2014.

The promotion was organised by the South African Table Grape Industry (SATI), in partnership with the Western Cape Government and leading Chinese importers and retailers.

Sources said this season’s promotion was a pilot study and that there is therefore much scope to increase activities next year and further increase sales.

SATI noted that despite challenges such as a global shipping container shortage and delays caused by increased inspections aimed at ensuring that a healthy and safe product reaches the consumer, exports to mainland China achieved a new record.

The marketing campaign, on which SATI worked with partners including Joywoo, Joy Wing Mau and Goodfarmer, included retail promotions and trade advertising and outreach.

Historically, more than three-quarters of South Africa’s almost US$1bn-worth of annual table grape exports have gone to the European Union and UK.

Now, SATI says it has set itself the ambitious goal of increasing exports to China by 10m cartons over the coming five years. As part of this effort, it has developed an exclusive “China Specification”, which ensures that the best possible South African table grapes are provided to this highly discerning market.

“China is an enormously important market to SATI’s strategy for future diversification and growth,” said Bestbier.

“We are committed to continuing our active generic promotion campaign for South African table grapes in China over coming seasons. Indeed, we look forward to more and bigger activities in the future.

“Although the 2021 season may be complete, our work in the China market is never finished. We look forward to hearing from potential partners in China’s fruit industry in order that next season will be an even bigger success for South African table grapes in China.”