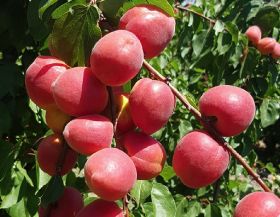 South African industry organisation Hortgro has said that, after last season's unexpected but welcome increase in stonefruit production, it is anticipating similar export volumes this campaign.

“Normality has returned after the drought years that distorted reference points and preceded the big increase of the 2020/21 season,” said Hortgro in a statement. “It’s still early days as many plum cultivars are in bloom now (mid-October) but at this stage, the industry is expecting fruit packed for the export market to range between 15m-16.5m cartons (5.25kg equivalents).”

While this is more or less the same crop as last year, Hortgro said an 8 per cent increase on the upper-end forecast could be on the cards, depending on how the season played out.

“Stonefruit growers experienced a good winter and a very mild to cool spring thus far," Hortgro explained. "The potential increase is primarily due by new orchards coming into production.

“Growers have been sensitised to apply proper thinning practices to ensure good fruit size, as the market for smaller fruit is limited.”

For nectarine exports, an increase of 9 per cent to 7.1m cartons (2.5kg equivalents) is expected. Like plums, there are several new nectarine orchards resulting in continued export volume growth.

Peach volumes are predicted to be the same as 2020/21 at 2.45m cartons (2.5kg equivalents). In recent years, dessert peach orchards have seen a decline in total areas planted.

“After the bounce-back of the previous season, apricot volumes are also expected to be the same or slightly down on the 2020/21 season. Apricot hectares have also experienced a decline in recent years.”

Hortgro said that logistics would remain a challenge, as was the reality worldwide, but with the experience gained in the last 18 months in managing challenges, the industry would again facilitate and coordinate actions, and exchange information between key stakeholders.

“South Africa will therefore remain a reliable and stable supplier of stone fruit to all its export markets," the organisation confirmed. "The crop estimates will be updated regularly as the season progresses.

"Hortgro will also publish per-cultivar information in the next three to four weeks as the fruit set settles, and a clearer picture of the coming season appears.”