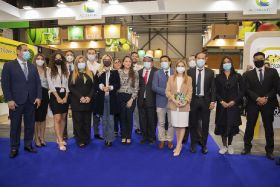 Representatives from Ecuador’s banana marketing and export association Acorbanec gathered in Guayaquil this week to celebrate the organisation’s fifth anniversary.

Acorbanec was formed on 10 November 2016 to defend the interests of the sector and promote the sustainable development of Ecuadorean banana exports.

Its membership has grown from 16 companies originally to 50 today, who together represent 38 per cent of Ecuador’s banana exports.

As well as providing members with trade intelligence services, it works to open new markets, provide industry statistics and lobby for positive changes in the legislation covering Ecuador’s banana industry.

Executive director Richard Salazar said Acorbanec’s dynamic growth had been sustained by the services it provides and the philosophy of equality that exists for all partners.

“Before, a tax of up to 2 per cent was paid on the FOB price, now it is on the differential, less the minimum price to support the producer; on that basis, up to 3 per cent is paid,” he said. “Additionally, we achieved a tax incentive for the producer, who if he is certified with Agrocalidad's good agricultural practices, has an incentive to pay up to 50 per cent less tax.”

The association has also signed strategic agreements to advise its partners on technical and financial matters.

One of them is with Coface, which allows members to access credit insurance to support the payment of the fruit and have information on the commercial behavior of customers abroad. Likewise, Acorbanec has been one of the main actors in the creation of the Ecuador Banana Cluster, which counts on the participation of unions from the entire chain to defend the interests of the industry nationally and abroad.

Salazar said the Banana Cluster continued to work on environmentally friendly production, as part of which it had supported the financing of a study with the University of California Davis to promote sustainability in banana crops.

He pointed out that more than half of Acorbanec’s partners are also producers. “In other words, we are reducing the distances that existed a few years ago, that antagonism between producers and exporters, for the good of the industry as a whole,” he explained.

Salazar said Acorbanec remained committed to promoting comprehensive regulatory reform to help the sector become more competitive and bring it in line with the reality of the markets, as well as continuing to support banana marketers.