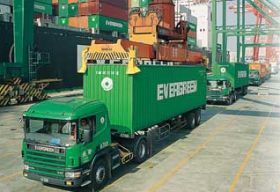 Evergreen Marine said it may increase the rates again after April as they are below break-even levels because of excess capacity, Dow Jones reported.

The company may attempt to push up Asia-Europe rates by US$300 per TEU in April. Freight rates on the routes, which are negotiated quarterly, are now down as much as US$500 to US$600 per TEU from the fourth quarter.

The company may hike the rates again in June and August, and will also consider raising rates on US-Asia routes from May.

About 40 percent of the company's revenue comes from US-Asia routes, and less than 40 percent from Asia-Europe. Evergreen Marine is the world's fourth-largest container shipping company by capacity.

If the company increases Asia-Europe rates, it would be the first time a container shipping company has done so since late 2007, said Charles de Trenck, an analyst at Hong Kong-based independent consultancy Transport Trackers.

Container ship operators, whose fortunes are tied to those of the global economy, have been hit by falling cargo and overcapacity and many have been cutting capacity by idling ships.

A record 6.5 percent of the global container shipping fleet was idle as of February 2, according to AXS Alphaliner, a consultancy.

Global weekly capacity on Asia-Europe routes are down by 24 per cent from late August to 320,000 TEU from 420,000, Evergreen Marine said.