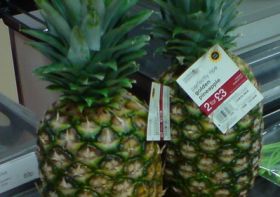 The UK market for imported pineapples is reportedly under intense pressure as the country's leading retailers engage in a price war aimed at encouraging sales of the fruit, which some feel have suffered during the recent economic downturn.

According to retail trade weekly The Grocer, research suggests whole fresh pineapples are now being sold for as little as £0.50, almost one-third of the average market price this time last year.

All four of the country's largest supermarket chains – Tesco, Asda, Sainsbury's and Morrisons – have apparently launched major price-led promotions on pineapples in recent weeks, reducing the average selling price from £1.45 last August to £1.10, the magazine said.

The base price, excluding promotional deals, is reported to have decreased by £0.27 to just £1.37.

However, one supplier quoted by The Grocer said the price promotions had not been all bad news for the trade.

"Prices have collapsed quite rapidly but volumes have gone through the roof," he told the magazine. "The category has been stimulated by the promotions but we have to reserve judgement on whether this is a good thing and see if the market can sustain these volumes in six months' time."