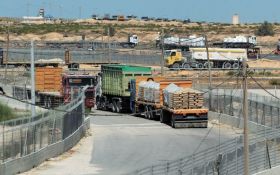 Israeli authorities have blocked ten truckloads of agricultural products, destined for Saudi Arabia, Jordan and the West Bank, from exiting the war-ravaged and besieged Gaza Strip, according to Al Ray Palestinian Media Agency.

The trucks are reported to contain in excess of 100 tonnes of vegetables, which Israel has held back since Sunday despite agreeing to the passage of ten truckloads per day.

In response, according to Times of Israel, Gaza's agriculture ministry has threatened to halt imports of Israeli fruit into the Palestinian territory.

The small coastal area of Gaza has been stifled by an eight-year blockade by Israel, in addition to the summer assault that saw tens of thousands of houses destroyed and more than 2,000 Palestinians killed.

Exports from Gaza stand at approximately 2 per cent of the pre-blockade level.

Israel's coordinator of government activities in the occupied territories claimed that the trucks were still awaiting inspection by the Ministry of Health, with the Ministry itself citing a lack of staff to do that.