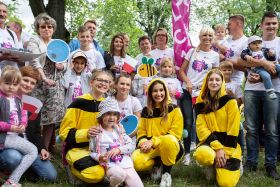 Poland officially kicked-off the 2018 blueberry campaign in the country by celebrating Polish Blueberry Day on 1 July.

The fruit festival is a symbolic event marking the beginning of the harvest, promoting the qualities of the fruit which has become a major success story for Polish exporters.

Polish Blueberry Day brought together consumers, growers and dieticians, with presentations featuring the qualities of blueberries, fresh fruit and blueberry preserves held at the Breakfast Market in Warsaw.

Promotions and tastings are held at the beginning of July in over 600 locations across Poland as the season gets underway.

Poland is one of the leading producers of berries in the world, with as much as 80 per cent of production exported, sold to 25 countries across four continents.

"The fruit goes to the most demanding markets" said Dominika Kozarzewska of the Polish Blueberry Promotion Foundation for Polish Press Agency.

This year, Lidl Poland became a special partner of the promotional campaign. Blueberries from Polish suppliers are already available (on Lidl shelves) in a number of European countries, including the UK, Ireland, Germany, Slovakia and Hungary.

The UK, which is this year’s honorary partner of the 'Blueberry Summer' campaign, has been the biggest consumer of Polish blueberries for many years.
The campaign is supported by the British-Polish Chamber of Commerce, with a common goal of promoting the Polish-British trade partnership.
Meanwhile, htis summer will see an educational campaign for consumers run to encourage them to eat more blueberries.
Agro-workshops entitled 'Where do blueberries come from?' for pre–school children will be held as part of the campaign.
The aim is to educate children on how fruits grow and ripen, how growers protect them from adverse weather conditions and how they are picked.
Carl Collen
comments powered by Disqus