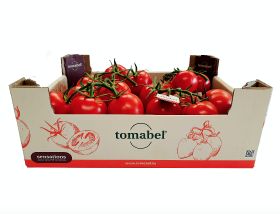 Since 2019, tomatoes have become the most important product at Roeselare-based REO Veiling, both in terms of volume and sales, according to commercial director Dominiek Keersebilck.

These larger volumes are mainly down to the strong increase in acreage of vine tomatoes, says Keersebilck.

In addition to vine tomatoes, the supply of loose tomatoes at REO Veiling is also on the rise, he said, although the increase is less pronounced.

"In 2020, our growers supplied 28,600 tonnes, an increase of 7,000 tonnes since 2017," said Keersebilck. "REO Veiling offers its vine tomatoes and loose tomatoes under the Tomabel and Flandria quality labels. They are packed in standard EPS-T cases or cardboard boxes, but are also available in specific packaging selected by the customer."

"Our supplies will increase in the near future, as many REO growers have plans for expansion," said Keersebilck. "In addition, we want to maintain and even expand the wide range of tomatoes we have been offering to date."

Concerning Brexit, Keersebilck is positive about REO Veiling's ability to meet the necessary challenges. "At REO Veiling, we do not speak of challenges, but of opportunities," he said. "For example, we have followed Brexit very closely and are convinced that due to our location and the image of our products, in beef tomatoes, as well as in leeks and strawberries, and with close cooperation with experienced exporters, we will have a good advantage in the UK market."