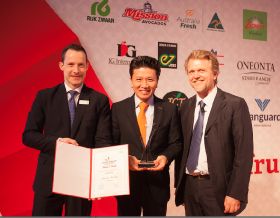 The Asia Fruit Awards, the annual pan-Asian awards for Asia’s fresh produce business are presented by Asia Fruit Logistica, and Asiafruit Magazine to celebrate excellence and recognise outstanding achievement for the best players in Asia’s fresh fruit and vegetable business.

The Asia Fruit Award is given in three categories – Marketing Campaign of the Year, Importer of the Year and ‘Produce Retailer of the Year.

Fruitday won the Marketing Campaign of the Year Award for ‘Mr Cheng’, its campaign to launch a Chinese orange brand with guaranteed sweetness.

While Fruitday has built its business as an online retailer of premium imported fruits, Mr Cheng saw the company venture into new territory with a move to develop a homegrown citrus brand.

Fruitday selected bingtang oranges grown in Yunnan province, investing RMB20m (US$3m) upstream into a joint venture packing plant in the region. The facility was fitted out with infrared Brix-sorting technology from Compac in order to achieve consistent quality standards and guaranteed sweetness in the fruit.

The orange brand was personified as Mr Cheng, a ‘romantic gentlemen’, in a move designed to create easier interaction with consumers and appeal to female online shoppers in particular.

After a ‘beta test’ in which it sent the fruit to numerous Chinese celebrities and well-known entrepreneurs, Fruitday conducted another round of promotions. In addition to extensive marketing activities on its e-tail platforms, Fruitday worked with China’s leading online match-making site Jiayuan.com, taxi service mobile app Didi, and the largest budget hotel chain Home Inn to make specially packaged and branded Mr Cheng products available in vehicles and hotels.

“Fruitday is really happy to win the Asia Fruit Award,” said the company’s co-founder Loren Zhao. “The Mr Cheng campaign was an important supply chain exploration for Fruitday. The idea for Mr Cheng came from the Fruitday team as we were seeking to learn from examples of fruit standardisation and Brix selection we had seen in other parts of the world, and to innovate in China’s fast-developing e-commerce market.”

Introducing the winner, Asiafruit Magazine editor John Hey said Fruitday’s Mr Cheng campaign broke new ground for marketing and branding of Chinese-grown fruit. “Fruitday has not just marketed the fruit on its consistent sweetness, it has given the product a personality, making it easy to create a dialogue with consumers,” he noted.

Importer of the Year: Jinwon Trading

South Korean company Jinwon Trading scooped the Importer of the Year Award in recognition of its leading position and pioneering role in the country’s fresh fruit import business.

As one of Korea’s oldest agricultural trading companies established in 1979, Jinwon has developed substantial warehouse and cold chain infrastructure from port to market as well as significant in-house expertise. The company sources a wide range of products from across the world, supplying multiple channels, including retail, wholesale, online sales and TV home shopping. It has forged strong relationships with leading global suppliers as well as major retailers.

“We’ve worked very hard with our team members not only this year, but for the past 40 years,” said Jinwon’s president Chang Hwa-Oh. “To receive this Award is a reward for our past efforts, an honour for the present and an encouragement to remain the best produce importer in the future.”

The Produce Retailer of the Year Award went to Sam’s Club China. The Walmart-owned membership-only warehouse club has carved out a niche in the Chinese retail market, servicing the needs of the country’s high-end consumers. While operating around a dozen stores in China, four of them are now ranked in the top ten of the 800-plus Sam’s Clubs worldwide.

Fresh produce is playing a key role in Sam’s Club China’s gains, where the retailer has succeeded in targeting high-end customers with high-quality fresh food in new formats.

“While Chinese consumers traditionally shop daily for fresh produce, and would not typically drive across a city to buy fresh foods in larger pack sizes, Sam’s Club has seen them doing just that,” said Hey.

Sam’s Club has introduced more western ways of merchandising to high-income shoppers, selling pre-packed produce in a market where consumers typically prefer to handpick their own, he noted.

By focusing on a slightly narrower number of SKUs than a full-service retailer and developing supply partners that understand its business, Sam’s Club has also been able to pre-select premium products for its busy and wealthy consumer base.

“It’s most encouraging to see that the recognition we’re receiving for our fresh foods quality focus from our members is also being noticed by the industry,” said Sam’s Club China’s chief merchandising officer Neil Maffey. “The partnership with our suppliers is enabling us to deliver great produce in great packaging to our members and this is why we are seeing huge growth in this area of our business.”

The three winners of the Asia Fruit Awards were presented with their trophies and certificates by Wilfried Wollbold, commercial director of Asia Fruit Logistica organiser Global Produce Events, and Chris White, managing director of Market Intelligence, which publishes Asiafruit Magazine and organises the Asiafruit Congress.

The Asia Fruit Awards were presented before the Networking Lunch at Asiafruit Congress, Asia’s premier fresh produce conference event held in Hong Kong. The conference sets the scene for Asia Fruit Logistica, which takes place on 7-9 September at AsiaWorld-Expo Center.