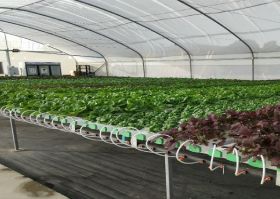 The process is being used to cool the nutrient temperature in NFT hydroponic lettuce being grown in Central Israel.

The two technologies have been combined to ensure the water that delivers dissolved nutrients to hydroponic bare plant roots remains within favourable growing ranges. The result is increased production quality and a shorter growing cycle – even in extreme summer weather conditions.

“This is a major breakthrough in greenhouse crop control,” said Roots CEO, Dr Sharon Devir. “Until now, the only option farmers had to reduce heat load in greenhouses was to use large evaporative cooling systems with several fans. However, they are expensive to buy and operate, use a lot of energy, and increase humidity levels within the greenhouse which increase disease levels on plants.

“RZTO cooling systems have none of those issues and focus on retaining core temperatures at the root zone – not in the ambient air. Cooling the NFT nutrient solution was made by ground source heat exchange only, using a circulating pump which consumed only 1.5kw/h of energy.”

Devir said the test site was hit with several days close to 40oC, along with very strong wind storms, one of which caused shade nets above most greenhouses in the region to blow away.

“While many nearby greenhouse crops did not survive these extreme weather conditions, the Roots’ cooled crop survived four hours of strong wind and severe heat without any shade net,” Devir explained.

“The RZTO and NFT cooling system was effective in stabilising the crop temperatures despite these extreme external weather conditions where the fragile crops were completely open to the heatwave and windstorm conditions.”