Banana prices must include real costs 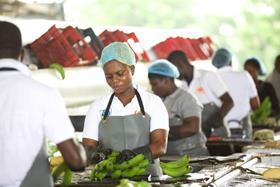 Growers are insisting, rightly, that if the market wants living wages, decent contracts and working conditions, as well as positive environmental impacts at the production end, then this has to be reflected in prices that cover the costs, with a margin for investment in what buyers and consumers actually want.

“Shared responsibility” is the watchword; and bananas can no longer be treated as a loss leader whose buying price can be infinitely squeezed.

The TR4 threat hanging over the whole industry is just one symptom of a production system that has reached its limits. New varieties and diversified agroecological methods are not a utopian luxury, but need to be explored as a way out of multiple crises that affect all those whose livelihoods depend on the trade.

Growers are now presenting a united front, and this is encouraging. The exporting countries and their producers could take measures to control supply, but buyers urgently need to play their part and understand that all the economic, social and environmental issues affecting the industry are interlinked. Trying to resolve one set of issues without seeing the whole picture will not lead to sustainable bananas for all. Keeping buying prices down is ultimately the surest way of causing the collapse of the whole industry.

Consumers in many countries have led the way in giving the banana sector the biggest Fairtrade market share in Europe with around 10 per cent, and a rapidly growing organic share. Nearly one in eight bananas sold in North America last year were organic, for example. This should be a signal to the big buyers that they can go further, as we are no longer talking about market ‘niches’ for organic and Fairtrade.

For years, Banana Link has sought to alert key players and consumers not only to what is wrong – and all the negative impacts of the current banana system – but also to what can be done to put the industry on a different track.

It is finally emerging from the scientific community that the only solutions to managing the TR4 disease probably lie in soil management, feeding soils biologically rather than chemically. But the investment that is required to make the transition on a large scale can only be made if the industry makes a united effort.

Many banana scientists are ready to support a transition. Many banana companies see the writing on the wall for the conventional Cavendish monoculture, even if they are not comfortable saying so publicly. Many workers are ready to contribute to these efforts on a daily basis if producers accept that they cannot go it alone without the participation of their workforce.

The question is no longer whether to act or what to do, but rather how and when. The World Banana Forum provides the space to work this out. The price of not heeding all the signals would be much higher than investing in genuinely sustainable bananas.