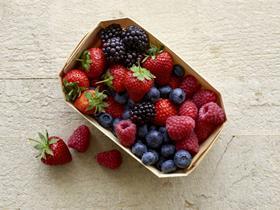 Eating berries can improve cognitive wellbeing, according to a new study.

A review published in the International Journal of Food Science and Nutrition has described how berries could have the potential to influence cognitive function in people of all ages.

In children and young adults, blueberry studies have been shown to improve memory and executive function. Further studies into the benefits of blueberries have also observed improvements in cognitive control of mood, meaning that the well-known superfood could play a role in helping to manage anxiety and depression.

It's not just among younger generations that blueberries can have a positive effect. Blueberries have been linked to slower rates of cognitive decline and improved working memory and executive performance as people get older. Given the fact there is an ageing global population, eating blueberries as part of a balanced diet could be another useful strategy alongside conventional treatments.

The study authors explained that positive effects for extracts, juices, and whole berries - typically freeze-dried and powdered - were seen at doses equivalent to one cup of fresh blueberries. These amounts can easily be achieved within a normal diet.

Dr Emma Derbyshire, public health nutritionist and adviser to British Summer Fruits, said: “Blueberries are full of polyphenols such as anthocyanins which have been linked to cognitive benefits. These are exciting findings and imply that berries have an important role to play in reinforcing cognitive wellbeing, both in school and as we age.

“Berries can be easily included in the diet, no matter what our age. Scattered onto cereals, pureed into porridge, juiced into a smoothie, or simply eaten as a portable snack. It will be fascinating to see how research evolves in this exciting field”.