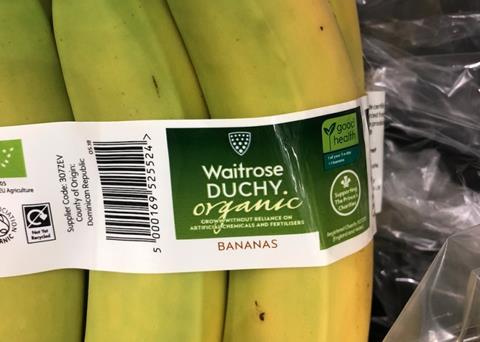 Bananas from the Dominican Republic on sale at Waitrose

Banana importers, distributors and retailers in the UK face a period of major uncertainty after it was confirmed that, in the event of a no-deal Brexit where continuity agreements have not yet been signed with key Latin American suppliers, the UK will lift its banana import tariff rate to €114 per tonne.

The announcementleaves the industry waiting to see if individual governments and trading blocs in Latin America will find a way temporarily to extend their current preferential arrangements with the EU to the newly separate market.

While the British government has confirmed that the majority of the UK’s fresh fruit and vegetable imports will be switched to a zero tariff should it fail to ratify a proposed withdrawal agreement with the EU, fresh bananas are among a very limited number of products that it says will continue to incur an import charge. A separate 16 per cent tariff will be applied to dried bananas.

The EU’s own base rate banana tariff of €117 per tonne has been coming down gradually over the past decade, from €176 per tonne, and is set to fall to €114 this year.

But most major producers in Latin America – Costa Rica, El Salvador, Honduras, Guatemala, Nicaragua, Panama, Peru, Colombia and Ecuador – also benefit from free trade agreements with the EU that include a significantly lower banana import tariff. This is due to come down to €75 per tonne by the start of next year.

As a result, companies that source fresh bananas from those countries will be waiting anxiously to see if their present tariff spending is going to rise – in theory by more than one-third – if the UK switches to WTO trade rules.

“It’s a little unclear to say the least,” commented one importer. “It looks as though the rate of €114 per tonne has been placed there as a default, which would be something of a concern for anyone bringing in [bananas] from Latin American countries.”

The Department for International Trade, which published the draft tariff schedule on Thursday, said in a statement: “Our transitional tariff regime will help to avoid disruption to our global trading relationships if we leave the European Union without an agreement. This is a temporary measure and we will be monitoring the economy closely, as well as consulting with businesses to decide what our tariffs should be after this transition period.”

Speaking to Fruitnet, a spokesperson for the department sought to clarify its position, explaining that the intention was to replicate the EU’s tariff schedule as closely as possible via continuity agreements.

“The €114 per tonne tariff we would maintain for bananas in the event of a no-deal Brexit is the Most Favoured Nation rate, which would only apply to countries with no existing trade agreement with the UK,” the spokesperson commented.

“In the meantime, we are working to replicate the trade agreements that countries have with the EU and we aim to have these in place if the UK leaves with no deal. The terms of those agreements that relate specifically to bananas will be as close as possible to the existing ones.”

The outstanding deals in question are understood to include Economic Partnership Agreements, which provide duty-free access for bananas to some countries in Africa, the Caribbean and Pacific (ACP), and free trade agreements with the Andean region and Central America, which provide tariff reductions on bananas.

Suppliers in a number of ACP countries enjoy duty- and quota-free access to the EU as part of a group called the Least Developed Countries, which will apparently continue to get the same preferential access for bananas through the proposed UK Trade Preferences Scheme.

'Overall, provided continuity agreements are in place, the tariffs on bananas would remain unchanged in a no-deal scenario, ensuring we retain existing preferential access for producers in Africa, Caribbean and Pacific. We do not expect this to have a substantial impact on UK prices of bananas, given that the vast majority of UK banana imports come from outside the EU.'

However, the likelihood of continuity agreements being in place for all of the UK’s key banana suppliers in the event of a no-deal Brexit is by no means guaranteed. The unique challenge associated with two of the country’s largest banana suppliers, Colombia and Ecuador, adds a notable layer of complication, for example.

Along with Bolivia and Peru, the Latin American nations operate as a single trade bloc and will therefore need to reach consensus on future trade relations with the UK among themselves before signing any continuity agreement.

Jaime Cárdenas, director of the Peru Trade & Investment Office in the UK, confirmed this was the case: “If Peru wishes to negotiate a continuity agreement with the UK in order to continue benefiting from preferential trading arrangements after it leaves the European Union, it can only do so in conjunction with its Andean Community partners, Colombia, Ecuador and Bolivia, which adds an extra layer of complexity.”