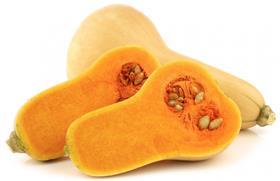 French marketer Prince de Bretagne is currently promoting the new squash season in France, as the last fields are harvested.

Volumes of Potimarron, also known as chestnut squash and described by the company as the “undisputed leader of the range”, are forecast to reach 5,000 tonnes for the 2020/21 season, with an increasing proportion reportedly being grown pesticide-free.

“Our certified ‘Grown Without Pesticides’ offer is expanding and now covers more than 30 per cent of our total Potimarron production,” the company stated. “For their third season, pesticide-free Potimarrons are easily distinguished by specific labelling and a generic on-pack banner.”

Also forming part of Prince de Bretagne’s squash range are the butternut squash, with 50 tonnes forecast for the season, as well as the Jack Be Little mini-pumpkin and the Patidou, or sweet dumpling squash.

“Brittany’s northern coast benefits from a temperate oceanic climate and loamy soil, which is conducive to not only growing vegetables, but also to preserving them,” the marketer stated. “It’s why Prince de Bretagne squash are better preserved and can be sold right through to March.”

The PDO Roscoff onion season got off to an early start this year, according to Prince de Bretagne, with large sizes reported.

Thanks to dry weather conditions toward the end of the growing period and during harvesting, the quality of Brittany’s pink onions is reportedly consistent, with volumes similar to last year.

As for pink garlic, the marketer anticipates a volume of around 30 tonnes this season, with sizes smaller than last year’s exceptional calibres.