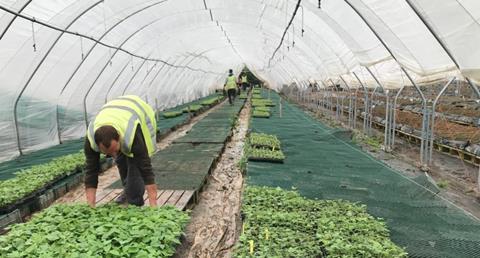 Foreign workers account for the majority of fruit pickers in several European countries, including the UK and Italy

Who will pick all the fruit? Whenever the thorny issue of immigration came up for discussion during the recent Brexit negotiations, it was already a question being asked by many in the UK fruit and veg industry. Scaremongering plagued the debate, with foreigners lazily stereotyped as a drain on resources that threatened to leave the country at “breaking point”. Now, with countries across Europe in lockdown as they try to contain the spread of coronavirus – a real and infinitely more serious threat – the spectre of unpicked produce left to rot in the fields has become all too possible.

“We need more people,” says Stefano Pezzo, whose companies Cherry Passion and Bragantini in Veneto rely heavily on foreign workers from countries such as Poland, Romania and Morocco to harvest a range of products including apples, stonefruit, berries and vegetables. Since the enormity of northern Italy’s outbreak began to become evident, it seems many of those workers have opted to head home rather than risk infection in a foreign land. “For our strawberries and asparagus, we are really short of workers. They simply aren’t there.”

A news story posted by Aljazeera’s correspondent Elisa Oddone said there was growing concern for thousands of mainly African migrant workers in the south of Italy who normally harvest fruit and vegetables. With healthcare provisions likely to be more stretched by an outbreak of the kind seen in the north, their welfare – and by extension their ability to pick products – appears to be under threat.

The report quoted Italian public health expert Nino Cartabellotta stating that similar growth in the number of coronavirus cases across the whole country, only with a delay of “around five days” between northern Italy and areas further south.

Giuseppe Borracci is head of new market development at Puglia-based company Serroplast, which supplies protective nets and canopies to grape and cherry growers around the world.

Speaking to Fruitnet earlier in the week, he said he and his grower contacts across the country had not noticed a decline in the available labour force.

“There are still foreign workers in Italy and they are helping us to cultivate the fields both in the north and the south,” he said. “Yes there are fewer coming in from outside the EU, but we are not short of labour. For example, around us there are lots of Albanians who settled here years ago and work with growers in the region to produce grapes. Around Foggia, there are more Romanians and North Africans who are working in the fields with vegetables and tomatoes, as in North Italy.”

Nevertheless, it’s clear the situation is completely unprecedented, not to mention unsettling. “Experiencing these things for the first time, we not only need to take every precaution and adapt to completely new protocols, we need to ensure everyone implements those measures very quickly,” Borracci added.

Across in Spain, where there has been a rapid escalation in the number of coronavirus infections during the past week, fruit and vegetable supply is coming under pressure too.

“Since the Spanish government declared a state of emergency on Saturday night, a series of internal and external factors have converged to affect the supply of fruits and vegetables,” commented Paco Borrás, chairman of the Export Committee at Freshfel Europe and former commercial director of Spanish fresh produce company Anecoop.

In an exclusive analysis for Fruitnet.com, Borrás said restrictions on the movement of people had been tightened, and although field and packhouse workers were still allowed to go to work, there was concern that numbers might begin to fall as the need to care for children at home became more of a priority.

“To date we’re not aware of any packhouse employees testing positive for coronavirus, but if this were to happen it could make the problem more acute,” he wrote. “Moreover, we expect to see more reluctance from people employed in packhouses to go into work due to the fear of becoming infected as they work in close proximity to their colleagues.”

Back in the UK, meanwhile, berry industry association British Summer Fruits is helping to launch an industry-wide recruitment campaign to get British residents picking fruit and vegetables – something previously unheard of in a country used to leaning on foreign workers to harvest its produce.

In the US too, producers are braced for a shortage of workers after the government said it would suspend visa interviews in Mexico.