With many producers on the brink of bankruptcy, Fedefruta met with the government on Friday to discuss new measures to ease the crisis

Chilean fruit producer union Fedefruta has agreed a series of actions with the government in response to the growing crisis facing the sector. 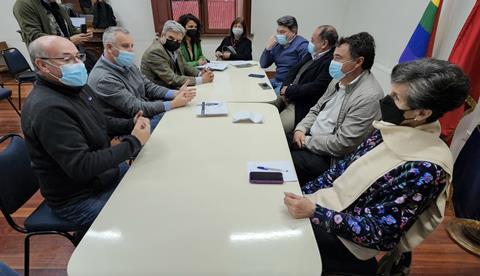 It follows a meeting between Fedefruta president Jorge Valenzuela, Agriculture Minister Esteban Valenzuela, Senator Isabel Allende and other regional authorities and grower associations on Friday to discuss the seriousness of the severe underfunding crisis facing fruit growers in the Aconcagua Valley.

The government was told that rising production costs, logistical disruption and the ongoing drought in the region are having a serious impact on fruit producers. The need to urgently approve Systems Approach protocols for table grape shipments to the US to eliminate the need for fumigation were also discussed.

Jorge Valenzuela said he and Senator Allende agreed on many aspects of how to manage the water shortage. “Many ideas have come up, such as seeing water matrices by region and smaller reservoirs. If we had smaller reservoirs, with less social and environmental impact, we could ensure greater supply,” he commented.

“There are works launched that we can fix to redistribute the water, but the most important thing was the issue related to the Irrigation Law 18450, its continuity and viability for greater efficiency, canal lining and technological improvements so that agricultural areas can count on water, starting with human consumption, sanitation and livelihoods.”

On the impact of the global logistics crisis, Valenzuela noted that many producers of table grapes, cherries, blueberries, apples and other fruits are on the brink of bankruptcy due to a lack of financing.

“There will be no returns for producers. Fruit is being lost due to delays in logistics, and together with the rise in shipping costs, inputs and labour, it has made this crisis even worse than the grape cyanide crisis,” he said, referring to the infamous 1989 incident when Chilean grape shipments to the US were banned following allegations that a consignment had been injected with cyanide.

Fedefruta is calling for Chilean ports to prioritise fruit shipments in the coming weeks. “Our product is highly perishable, we have no way to defend ourselves against the logistics crisis,” Valenzuela said.

Fedefruta also emphasised the need to address the growing shortage of agricultural workers. It asked the government to consider relaxing rules on immigrant works to help deal with the crisis.

Agriculture Minister Esteban Valenzuela said the meeting had been very fruitful. He recognised the fruit industry’s importance in generating employment and food security, both at home and globally.

Allende said the government was aware of the serious difficulties the sector is facing and would look at ways of making export logistics a priority, making progress with the Systems Approach protocols and facilitating credit lines with the banks.

“We want to collaborate…because we want Chile to advance in sustainable agriculture, in water efficiency, and in food that everyone needs,” she said.