Dole is opening up its superhero contest to so-called “everyday heroes”, while introducing new Marvel-themed banana and pineapple sticker designs

Dole Food Company has added new ways for everyday heroes to qualify for a chance to win thousands in prize money, expanding the eligibility opportunities for its Dole Celebrate Super Heroes Contest.

The contest, which was designed to acknowledge everyday acts of heroism and selflessness, is now open for friends, family members, neighbours, classmates, work colleagues and others to nominate themselves or their everyday heroes for a chance to win one of eight US$1,000 First Prizes and the US$2,000 Grand Prize.

According to Rachel Young, Dole’s manager of digital marketing and communications, the change came about after Dole received multiple requests to nominate unsung heroes for bettering their families, neighbourhoods and communities.

The contest is part of the “Dole Healthy Heroes, Assemble!” empowered-living initiative, which was inspired by the Marvel Universe and continues until 10 September.

“While we celebrate Marvel Super Heroes for saving the universe, this contest is dedicated to honouring the simple, positive things we all do,” said Young, “from showing kindness to strangers, taking care of family members and volunteering in the community to simply getting through a hard day with style, dignity and a positive spirit.”

“A total of 26 unique stickers and tags will be released throughout the life of the programme,” Dole stated, “and Dole has created a free, downloadable Banana Sticker Peel & Play Hero Book to help fans collect every sticker design.” 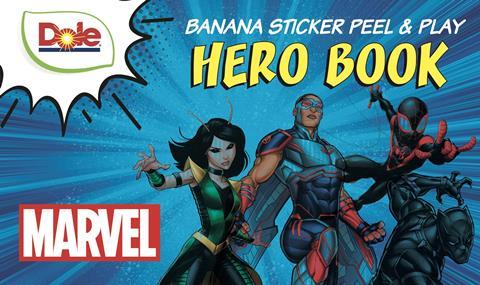