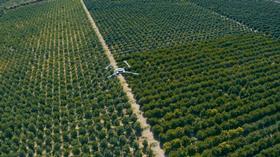 According to the company, which specialises in premium varieties including a number of unique red-fleshed oranges, various aspects of its production have been improved in the past couple of years through the use of data from satellites, drones, and other measurement tools.

These, it says, have allowed it to keep track of soil and water requirements more effectively. That’s because it can now monitor tree health, gauge the amount of moisture in the soil, air and leaves, understand how much wind and light there is, and track adverse environmental conditions with greater accuracy.

Data collected and processed by specialised software apparently provide useful analyses for its agronomists, who can undertake more targeted interventions to improve the management of groves and the quality of their fruit.

Crucially, the company said the technology had enabled it to cut water and fertiliser usage, as well as waste.

For many years now, Oranfrizer has used integrated pest management systems in the field and during post-harvest operations to ensure that pesticide residues on its harvested citrus are below even the strictest limits required by law.

Its new precision farming practices are expected to increase that level of control further.

“In order to continue to shape the future of blood oranges in Sicily, we want to make responsible choices and take into account the impact that people and production systems have on the environment,” explains Nello Alba, chief executive officer of Oranfrizer.

“Moreover, never before have we seen the consequences of climate change as in recent years, with our citrus groves alternating between long periods of drought and flooding,” he adds.

“In order to run large agricultural enterprises, to better manage limited resources and to defend them from unpredictable events, we are testing advanced technological systems that give us useful and immediate information, allowing us to act more carefully to protect the harvest, for the benefit of healthy and safe food, and in a way that respects our planet.”

Oranfrizer began to test precision farming technologies in 2019. Those trials continue today on around 30ha of citrus groves situated on the slopes of Mount Etna volcano, in eastern Sicily.

Its packing plant in Scordia, Catania, meanwhile, now generates around 30 per cent of its electricity from solar. Furthermore, the group has taken steps to reduce the amount of plastic and increase the amount of paper used in its packaging.