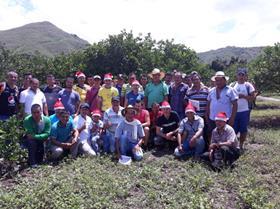 Exportaciones Colombianas Agropecuarias (Excoagro) has been exporting organic Persian limes to Europe since 2017 and is now looking to break into the North American market.

In 2017, the family-owned company spotted an opportunity to export organic Persian limes after seeing the product’s strong growth potential in the European market.

Together with Aspromayo, a small group of producers in a remote corner of the Department of Nariño in the south of the country, and Dutch importer OTC Organics, it has built up a successful weekly programme supplying supermarkets in Germany, France, Norway, Belgium, Denmark and Switzerland among others.

“We are proud to say that we were one of the pioneers in the export of organic limes from Colombia,” says the company’s sales and marketing coordinator, Angela Maria Cardona.

“From the outset we worked hand-in-hand with Aspromayo and OTC to train the growers in organic cultivation methods, put in place all the necessary export and certification procedures and adapt the entire logistics chain to ensure the fruit is packed and shipped according to market requirements.”

Last year the company exported around 1,000 tonnes of organic limes in weekly shipments from Colombia’s Caribbean ports. And with 186ha of production to draw from and plants to certify farms in other parts of the country, there is plenty of potential for the company to scale up export volumes.

Other plans for 2021 include starting up a conventional lime programme and the construction of a second packhouse that will have double the capacity of its existing facility.

“Although we don’t have our own farms, we are very hands-on when it comes to production,” Cardona continues.

“We employ three full-time professionals who continually review and control each and every agricultural process on the farms.”

With a well-established programme in Europe, the company’s next goal is to break into the North American market. Alongside GlobalGAP, it has become National Organic Program-certified and is all set to carry out its first shipments within four weeks.

“We know that it will be a challenge because the North American market is well served for most of the year with Mexican limes, but we want to take advantage of the months when Mexican supply is lower and believe there is a window for our limes based on their quality and availability,” says Cardona.

She notes that the market has change radically since the company carried out its first exports. “Back then, Mexico was basically the only supplier. There was not a sufficient volume of organic limes to meet demand in the European market and prices were around 25 per cent higher than today,” she explains.

The fact that Colombia has been able to make significant inroads in such a short time is testament to the efforts of its producers and export companies, as well as its many natural competitive advantages – not least its year-round production and short transit times to Europe.

Cardona acknowledges that the Covid pandemic has made life hard for suppliers, particularly as lime sales are heavily reliant on the foodservice sector and have therefore been hit hard by the closure of restaurants, hotels and other food outlets.

Nevertheless, she is confident that the uptick in demand for citrus fruit in general thanks to its high levels of Vitamin C will stand the sector in good stead over the coming months and years.