Apple growers in France say they need an additional €0.20 per kilogram to save the country’s orchards, as the impact of increased costs bites hard

ANPP, the French topfruit association, offered a stark warning on the current state of the apple sector in France in a post on LinkedIn entitled “Apple industry on the verge of ruin”.

Photos from the association showed producers in the process of uprooting their own trees due to the unsustainable price currently being paid to growers. 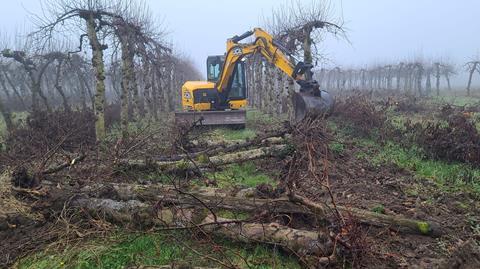 “Having warned for several months now of the dire need to increase the price paid to producers, today, in several regions of France, producers are uprooting their orchards,” ANPP reported. “In Angers, Avignon, Montauban, in Limousin and in the Hautes-Alpes, several hundred producers gathered to show the difficulties faced by French orchards as a result of increased costs.”

According to ANPP, producers were demanding an additional €0.20/kg from their customers, distributors and processors in order to be able to save France’s orchards.

“While France is a major apple-producing country, 1.26ha of orchard are now disappearing every day,” ANPP warned. “A decrease in France’s cultivation area is not inevitable if prices are quickly revalued.”

However, to regard what is happening in France as a specifically French concern would be an error, according to experts.

James Simpson of UK grower-packer Adrian Scripps wrote: “The French always seem better at demonstrating the issues. British growers are facing exactly the same problem. Returns for many just don’t stack up. Growers have cancelled new tree orders for this year and next. Many have increased the areas they are removing.”

Marc Peyres of French exporter Blue Whale suggested the present crisis could even be global. “Do you know a European country where fruit growers are happy about returns and the current cost of inflation?” he asked. “I believe this crisis is quite general, including in the Southern Hemisphere and the US.