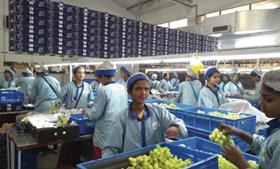 Indian grape grower-marketer Fresh Express has launched a new initiative aimed at empowering women producers in the state of Maharashtra in collaboration with leading European retailers.

Under the scheme, the family-owned company, which exports around 4,500 tonnes of table grapes a year to 17 countries under its Unigrape brand and employs more than 600 people – mostly women – at the height of its season, will contribute a percentage of the sales value of every punnet sold to programmes covering these four key areas.

The campaign will feature eye-catching interactive in-store displays and be supported through print and digital media highlighting the personal stories of some of the company’s women farmers. 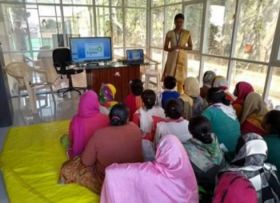 A commitment to socially-responsible, natural farming is deeply embedded in the company’s philosophy. Under its slogan: ‘Naturally-farmed, Fairtrade fresh produce fuelled by Women Power!’ it aims to bring about a green revolution in the corner of western Maharashtra where its production is located and transform the lives of its workforce.

“More than 95 per cent of our workforce are women and we are proud to support them,” says Nina Patil, who founded Fresh Express 26 years ago with husband Ranjeet. “Our social programmes are designed specifically for the needs of the community.”

Historically, women in India have had limited financial independence – most do not have a personal bank account and often have to rely on money given to them by their husbands.

“Such a structure of dependence severely limits their opportunities to take on leadership or decision-making positions in society,” Patil explains. “We wanted to bring about a change where the woman learns to be economically independent and has control over her undertaking from end to end, without depending on men to provide her financial support.”

Efforts by Fresh Express’s technical agronomist team to develop more natural farming methods have so far brought about a 33 per cent reduction in chemical usage. Employing cutting-edge technologies, the company’s Zero-Budget Natural Farming programme allows even the smallest and poorest farmers to grow chemical-free food with minimal water usage and at minimal cost.

An example of this is the concept of Biological Brewing, wherein natural extracts mixed with effective microorganisms and seaweed and left to ferment. When added to the soil, the resulting mix improves soil health, enhances fertiliser input, improves root structure and germination and increases yield.

“Each household, led by the housewife, will set up a bio-brewing unit to produce enough brew to not only maintain an organic kitchen garden for her own family, but also grow enough to sell in the local market,” Patil explains.

Another part of the strategy is to encourage the women to sell surplus vegetables for processing into organic sauces and pickles.

“All of these avenues, besides providing an income, give women an immense confidence and satisfaction as she fully involvers herself in the complete process from growing to marketing her produce,” Patil continues.

As most of these women are employed in seasonal jobs like grape picking, they spend much of the year as stay-at-home-wives. Fresh Express has launched a self-help group, Sakhi (meaning friend in the local language), which teaches life skills such as sewing, jewellery making and decorating earthen lamps, as well as natural farming. They are encouraged to sell what they make online through international platforms in order to become more self-reliant.

“Workshops on topics such as marketing, negotiation, hygiene and food safety are also planned to help them to value the importance of their work and gain confidence to come to the forefront, take initiative and ownership for what is rightfully theirs,” says Patil.

The company draws on a wealth of international support to develop its ground-breaking initiatives, including the Cherie Blair Foundation for Women UK; the Fairtrade Foundation, and Global Women Fresh. Its efforts have also been recognised by the Austrian government which has chosen the company to be part of its Austrian Leadership Programme.

Patil, a firm believer in the power of direct action, hopes that by telling consumers about these programmes and sharing individual success stories they will be encouraged to get involved.

“How they would like to contribute is up to them. It could be financially, or by offering technical expertise or suggesting ways to improve our programmes. And they are, of course, welcome to come to India and participate directly by volunteering to teach skills which can benefit the women,” she says.

“Ultimately, our goal is to encourage, educate and empower women towards financial independence so that they can made independent decisions on how to spend or save their income.

“When the women of our community share stories with us, we see a bright future – not only for them, but also for their young daughters for which they are setting an example.”