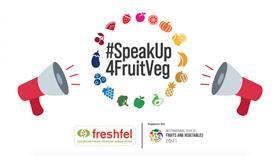 Freshfel Europe has today (5 January) launched its flagship campaign for 2021, #SpeakUp4FruitVeg, a digital campaign that will be at the forefront of the association's activities as it celebrates and supports the 2021 International Year of Fruits and Vegetables.

The new campaign is aimed at EU decision makers to boost support for the fresh fruit and vegetable sector in all policy areas, in the shift under the European Green Deal towards sustainable and healthy diets.

Freshfel explained that the campaign will be featured across Freshfel Europe’s social media accounts (Twitter, Facebook, LinkedIn) and is primarily for European Commission officials, members of the European Parliament and member state representatives.

Currently the average EU daily fruit and vegetable consumption per capita is 363.77g, which is below the minimum recommended daily consumption of 400g by the WHO.

The #SpeakUp4FruitVeg campaign will run throughout the duration of the International Year of Fruits and Vegetables and will cover the extensive range of policy areas that are part of Freshfel Europe’s work in Brussels to strengthen technical and financial support for the sector.

This includes EU policy related to trade, sustainability, food safety and quality, health and nutrition, promotion and research and innovation among others.

“Freshfel Europe’s new campaign, #SpeakUp4FruitVeg, builds on the association’s work to boost support for the sector in all areas in the renewed movement towards sustainable and healthy diets across Europe since the publication of the European Green Deal in late 2019,' explained Freshfel Europe general delegate Philippe Binard.

“With low environmental-impact production and a high daily consumption recommendation the fruit and vegetable sector is best placed to help consumers reduce their food consumption impact on the environment and simultaneously better their overall health and wellbeing,' he added. 'We need increased support by EU policy-makers to realise this in all demographics across Europe.”