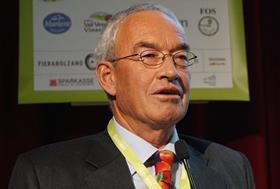 Global apple production will increase considerably over the next six years mainly as a result of improved yields in China, placing huge pressure on existing suppliers to broaden their international reach in order to maintain decent returns.

That was the main message of a talk given by Peter Beaven, president of the World Apple and Pear Association, at Interpoma 2014 in Bolzano on 20 November.

“What we’re going to see is increased production just from what’s already been planted,” he said. “Productivity in China, which already produces half of the world’s apples, is still only sitting a bit above 15 tonnes per hectare so there’s potential to grow quite considerably.

“Our prediction is that by 2020 there will be 90m tonnes [of apples] in the world compared with 78m tonnes today.”

According to Beaven, a recent increase in apple production worldwide has been down to greater efficiency in existing orchards.

“This has been mainly the result of consolidation and investments by the bigger players,” he explained. “They are better able to do the research and introduce better production practices.”

As production continues to rise, he said, the need to pursue new commercial avenues in emerging markets would remain key to ensuring the category’s future profitability.

“We need to identify areas of strong and growing demand,” he concluded. “Luckily for us, stable demand in traditional markets has coincided with growing demand in emerging, new-world markets.”