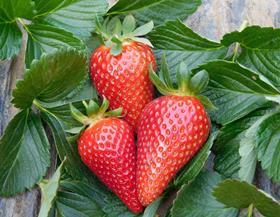 The Italian Nursery Consortium (CIV), based in San Giuseppe di Comacchio, has highlighted the potential of the Parthenope (CIVS115) strawberry variety in the south of Italy.

Already well established in the Alto Casertano area, Parthenope also has good potential in Piana del Sele, the CIV revealed, having apparently played a crucial role in the variety's development in Italy.

Piana del Sele has now reportedly become a specialised area for the crop, with 200ha dedicated to the highest quality production.

Parthenope is a low-chill variety with a low environmental impact, requiring little fertiliser, and one that benefits from high precocity and productivity, according to the CIV.

Giampiero D'Onofrio, technical manager of the Jonico Ortofrutticoltori Consortium (CJO), reported that the cooperative had seen its production area for the variety grow for three consecutive years, and decided to plant 300,000 misted tips for the current 2021/22 season.

'The plant has an excellent root system with an open growth habit, which explores the soil well and is easily able to take up the necessary nutrients,' said D'Onofrio. 'The variety also lends itself to the use of beneficial insects for an integrated fight against the main pests of strawberries, such as thrips and red spider mites.'

According to Onofrio, the first harvest runs from 20 December 2021 until the end of January 2022, with a production peak of 30-40g per plant from 20 January.

Aesthetically, Parthenope is also regarded as unique. 'Despite the low winter temperatures there are no deformed fruits or irregularities in the colour,' revealed D'Onofrio. 'The fruit maintains a bright red colour over its entire surface, remaining the same even when temperatures rise late in the season. Furthermore, the fruits show an elongated conical shape, highly distinctive and regular for the entire duration of the harvest. It is also worth underlining the high resistance to handling thanks to the excellent fruit firmness which gives Parthenope a long shelf-life.'

'In general, the agronomic and commercial performances described above allow us to identify the cultivation of Parthenope (CIVS115) misted tips as a valuable choice for future seasons in this area during the early segment. We are confident that the fruit's flavour, aroma and Brix, as well as its crunchy and firm texture, will make CIVS115 a variety that will be greatly appreciated by consumers.'