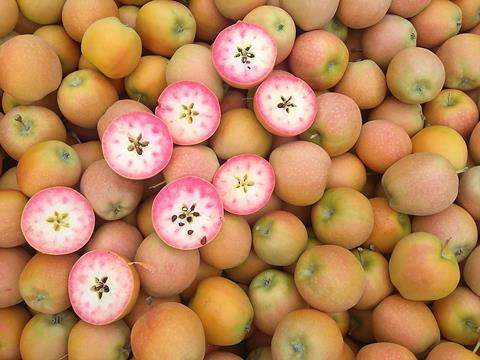 Some of Europe’s leading retailers are reportedly preparing to participate in a second year of commercial testing for Kissabel, a collection of red- and pink-fleshed apples being grown in increasing volume across Europe.

Following last year’s successful debut at Fruit Attraction in Madrid, the varieties' developers will be back to the show on 22-24 October, backed by a group of confident producer-exporters.

“We plan to sell the fruit in several markets across Europe, and some will be sent to our customers outside Europe,” reveals Marc Peyres, commercial export director at French supplier Blue Whale. 'The objective is to test its potential in a wide range of individual markets. Our customers have a lot of expectation and excitement for Kissabel.”

Offering attractive colours, excellent flavours and different harvesting periods, this season’s crop – which now extends to France, Germany, Italy, Switzerland and the UK – is larger and more promising than ever.

The range features three varieties: Rouge, with red skin and flesh; Orange, with orange skin and pink-red flesh; and Jaune, with yellow skin and subtle pink flesh. Those trialling its production believe this colourful collection’s prospects are very bright indeed.

“We expect a very good quality. Red-skinned Kissabel are really promising in German growing conditions,” says Dirk Zabel, head of variety innovation at the German Fruit Variety Consortium, DOSK. “The incredible berry flavour and intense red flesh are something really special. The Fruit is reminescent of an apple from grandma’s garden: rustic and genuine”.

In the UK, meanwhile, Orange and Jaune are both doing well, according to Jeremy Linsell, technical and performance development officer at Worldwide Fruit: “We have found these two selections perform incredibly well under UK conditions. In the UK, our picking is later than mainland Europe, and we think this contributes to the exceptional flesh colour we achieve.”

Luca Lovatti of NovaMela, which represents the group’s five Italian partners, says more Rouge is being planted in the country. As a result, the consortium is stepping up its own efforts during a second year of commercial testing: “The quality of Kissabel Rouge seems quite good in terms of size and internal colour. With the quantities available we will organise promotions in supermarket stores to explain the fruit’s key features to consumers.”

In Switzerland, consumer tests are planned with the country’s two biggest retailers, Migros and Coop. Christian Bertholet, category manager for fruit at Fenaco, is happy with the company’s new Orange crop. “The apples are very nice this year in terms of size and visual, external aspect,” he comments. “The sugar is also very high, with about 13° Brix.”

Kissabel apples are marketed by Ifored Group, which brings together some of the world’s biggest and best-known fresh apple suppliers: Alliance Mesfruits Gerfruit and Blue Whale in France; Greenyard and Worldwide Fruit in the UK; Fenaco in Switzerland; La Trentina, Melinda, Rivoira, VI.P and VOG in Italy; Nufri in Spain; Elbe-Obst, ELO, Landgard, MaBo, MAL, OGM, VEOS, VOG and WOG in Germany; Mono Azul in Argentina; Unifrutti Traders in Chile; Dutoit in South Africa; Yummy Fruit Company in New Zealand; Montague Fresh in Australia; and Next Big Thing in USA and Canada.

According to Ifored, Kissabel is the product of more than two decades’ varietal research conducted using completely natural methods by French breeder IFO.