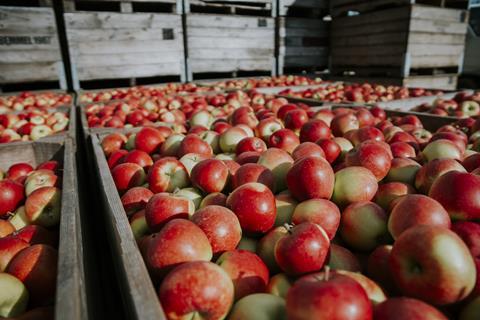 Confidence around this year's Kanzi apple harvest in various European countries is reported to be high, despite a record-breaking heatwave in Europe. According to the brand's marketers, 'literally every flower' has turned into an apple, with the conditions ultimately proving perfect for the apple's red blush and characteristic fresh sweet taste.

That doesn't mean it was easy for growers, who have apparently had to thin bunches more than ever before so that the apples would grow to the required size. Brothers Roland and Alouis Van der Zandt, who grow Kanzi in the Betuwe region of the Netherlands, are well aware of the importance of thinning.

“An apple tree must be optimally balanced,' they say. 'It is important that there are not too many apples on the tree, at the expense of taste and colour. We know for sure that extra attention and care for a tree make the difference between a moderate and a good harvest.'

For Herman Vanmarsenille, who produces Kanzi in Gingelom, Belgium, netting that is normally employed to protect the fruit against hail proved to have a secondary use. 'This year we were not spared by the bright sun,' he reflects. 'We have had quite a few burned apples. But luckily we have hail nets that mask the direct sun a bit and we’ll still get a great harvest.'

The drought and bright sun were also the major concern for the Van der Zandt brothers: “Fortunately, we grow the Kanzi apple, which is a strong apple that can withstand the heat well – on the tree but also afterwards.'

In contrast with other apples, Kanzi is also said to have seen a 'huge' spike in sales peak following the warm period. 'This is because Kanzi is the only apple that stays tasty on the fruit plate even when it is hot,' they suggest. 'Kanzi is what you call 'survival of the fittest'.'

German grower Hubert Bernard, who is based in the Bodensee region, is also full of praise for Kanzi. “The last two years we have had huge frost damage,' he says. 'We could not supply the market well. Only one apple stood out from the rest: Kanzi. We were able to deliver them without any problems. This year we had no hail and no frost. The quality will just be sensational this year.”