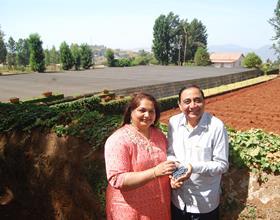 High up in the Panchgani Hills, around 200km south-east of Mumbai and 4,500ft above sea level, something highly unusual is happening. Unnoticed by all but a handful of India’s more than 1.3bn people, the harvesting of one of India’s first commercial blueberry crops has just begun. Despite the fact that fruit production and consumption in this enormous Asian market is dominated by bananas, mangoes, citrus and papayas, it’s not wrong to suggest that the arrival of this temperate fruit – and indeed one so closely associated with a social media-driven explosion of interest in healthy eating worldwide – could mark the start of a potentially huge success story for the global fresh produce business.

It’s an exciting time for Ambrish, Yujita and Parth Karvat, whose company Yupaa Group is behind the new project and has championed investment in India’s emerging fresh berry business. For the past three decades, it has been making use of Panchgani’s relatively cooler climate to grow high-quality strawberries for India’s more affluent and discerning consumers; it added raspberries ten years ago and has now embarked on its new adventure with blueberries. Starting with a trial plot covering one acre, it plans eventually to harvest the fruit for up to four months, beginning in February.

Those already familiar with Karvat, who delivered a fascinating talk on the Indian berry market at last year’s Global Berry Congress in Rotterdam, will know that Yupaa Group is not just a producer but also a major importer of fresh fruit from all over the world. Since July 2016, its sourcing and distribution operations have been part of Yupaa Fresh, a joint venture with South Africa’s Capespan Group.

For that reason, the possibility that this initial foray into local production might be the seed from which year-round demand for blueberries will grow is a very real one. After all, South Africa itself is fast becoming a serious contender in the international blueberry trade. “We’re going to be selling the fruit in Mumbai itself, to supermarkets and street vendors,” Karvat explains. With some careful planning and a fair amount of patience, it’s a market that could grow and grow.