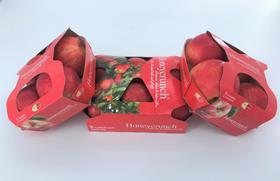 The new packaging has been in development for around six months, he said, and was designed to respond to the desire of the group’s retail customers to remove plastic packaging from their shelves.

According to de Puineuf, Innatis started packing with cardboard punnets a week ago and is gradually rolling them out to customers across Europe.

“These new designs are an extension of the work we have done in our orchards,” he said, “following the standards laid out in the ‘Vergers Ecoresponsables’ model.”