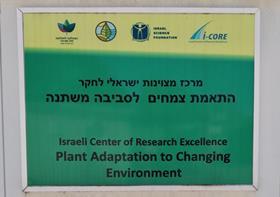 BreedX, an innovative plant breeding company established only in 2017, is focused on breeding both tomatoes and peppers for cultivation only in passive greenhouses. In other words, varieties of both crops are developed that will successfully grow and produce without heating or artificial lighting, exploiting the natural resource of sunlight in growing structures protected by either (or both) netting or plastic sheeting.

Varieties developed are already producing crops, not only in Israel but also in Almeria, Spain, and in Culiacan, Mexico. BreedX has also taken over breeding and development of the world’s first seedless pepper, varieties little affected by extremes of both cold and heat during the growing season and producing high yields as the energy used in seed production is diverted to vegetative production.

Another young company, plantDitech, founded three years ago, focuses on ‘functional phenotyping’, providing a tool for researchers, plant geneticists and breeders, and for those working on chemical inputs like fertilisers and biostimulants. Their work is sped up, costs are cut and plant strains are quickly and efficiently identified that are best adapted to combat a range of abiotic stresses, such as extreme growing temperatures, drought and excess soil salinity.

PlantDitech has the tools – both hardware and software – to provide high-throughput functional phenotyping and real-time analysis, leading to reliable conclusions. To date, those purchasing plantDitech technologies include seed companies, agricultural and food research institutes and agrochemical companies.

As part of its efforts to breed and develop drought-resistant crops, there is an emphasis on “new” or “”lesser-known” crops. As food productivity has its limits, the prospecting of unutilised or underutilised flora as food candidates is collectively recognised as a sustainable option.

In southern Israel’s stifling heat, rows of salicornia, commonly known as sea asparagus or sea beans, grow under translucent tarps, planted in sandy soil and irrigated with saltwater. This environment would kill most plants, but, in partnership with researchers at Ben Gurion University of the Negev, local farmers are exporting them to markets in nearby countries.

Salicornia tastes like salty cucumber and grows wild in coastal areas around the globe. In recent years, researchers have begun to focus on them for agriculture, especially in dry coastal regions such as India, Israel, Turkey and the UAE. These researchers’ efforts are defining what extremes the plant can withstand, its nutrient needs, and how to get it to grow faster and at higher yields.