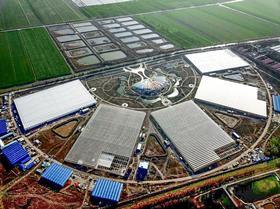 Jaguar The Fresh Company has announced that its Chinese subsidiary, Leopard Fruit Trading (LFT), has signed a deal with FoodVentures China to market fresh produce grown by a new FoodVentures greenhouse project in Shanghai.

FoodVentures CEO Dirk Aleven said: “The tomatoes are starting to bloom already. The first harvest from the new greenhouses is expected by the end of May.

FoodVentures will undertake the production and project development, while LFT will focus on the marketing and sales to Chinese retail and wholesale customers.

LFT has to date mainly been known for its import portfolio, but from the end of May it will also act as a supplier of locally grown, fresh produce.

Christian de Haas, Jaguar’s Asian manager, said: “LFT’s commercial team, based in Shanghai, is in direct contact daily with the retailers that we intend cooperating with.

“We are confident that these Dutch-style greenhouse vegetables will create a lasting impact in the Chinese consumer market. Jaguar The Fresh Company is proud to be the preferred partner for FoodVentures in this ground-breaking project”.