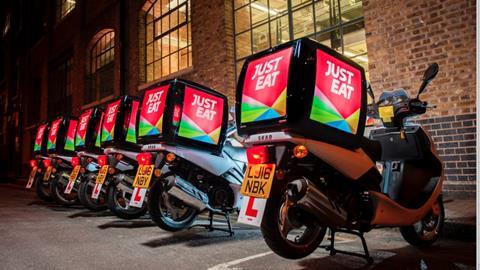 Underlining an ongoing dramatic shift in consumption habits driven by new technologies, food delivery service Just Eat has delivered a notable increase in sales for the first quarter of 2018.

The company, which positions itself as a global marketplace for online food delivery, reported its revenues in the three months to 31 March were up 49 per cent to £177.4m (51 per cent on a currency-neutral basis), driven by strong growth in customer demand as well as a greater proportion of higher-value orders.

In the UK, where its headquarters is based, Just Eat’s orders reportedly rose 24 per cent to 29.7m during the first quarter, from 24.0m in the year-earlier period, as it digested the recent acquisition of rival delivery operator Hungryhouse.

Orders in its international business, which extends to 13 countries in Europe, Asia, Oceania and the Americas, were also strong.

The company said they rose 46 per cent to 21.9m, versus 15.0m in Q1 2017, apparently driven by continued triple-digit order growth in Canada and strong performances in Italy and Spain, partly offset by what it described as “softness” in Australia.

“We continue to progress delivery-based initiatives in key markets, driven by the strong performance of SkipTheDishes in Canada,” the company noted. “In Australia, we completed the Menulog replatforming and, in April, launched delivery services leveraging SkipTheDishes’ expertise.”

Chief executive Peter Plumb commented: “Just Eat has had a strong start to the year. We delivered our 400 millionth order in the UK, grew well in Italy and Spain, whilst powering continued momentum in our Canadian delivery service SkipTheDishes. I’d like to welcome all our important new Restaurant Partners to the Just Eat family, including those from our successful recent acquisition of Hungryhouse.”

Paul Hickman, analyst at Edison Investment Research, described the result as 'breathtaking' in the wake of last year's growth record of 45 per cent.

'Orders were up 32 per cent in the quarter, with the lion’s share of growth, 46 per cent, from international operations led by Canada, where growth was over 100 per cent, as well as Italy and Spain,' he noted.
'In the UK, growth was comparatively muted at 24 per cent, a number that would still be unthinkable for any conventional restaurant operator. The fact that 6per cent of that growth was from the January acquisition of Hungryhouse only serves to emphasize the very largely organic nature of growth overall.'
Hickman added: 'One of the most impressive features in this report is the 21per cent implied increase in average value per order from £4.95 to £5.97. Numbers like these are emphatic evidence of the channel shift underway in the eating out space and serve as a grim warning to traditional restaurant operators.'